The Story of One of the Most Prolific Inventors in History

In 1928, a 19-year-old Edwin Land, who would later become the father of instant photography and the founder of Polaroid, dropped out of Harvard before the end of his freshman year. He had to finish his experiments on an invention he thought had tremendous commercial potential: the plastic polarizer. [Source: The Atlantic]

The process of polarization—removing glare from bright light—had until then always required large pieces of crystal rock. The teenage Land developed a more useful material to polarize light. He successfully embedded tiny crystals into a thin plastic sheet and named his invention “polaroid.” Land’s polaroid would become ubiquitous technology, of course: Eastman Kodak used it for camera lenses. American Optical used it for sunglasses. Today, plastic polarizers are found in everything from car windshields to LCD screens.

But before showing polaroid to anyone, Land sought legal protection. Through a friend he was introduced to Donald Brown, a young patent attorney who would secure a patent on Land’s new material. This early patent protection allowed Land to successfully commercialize his invention and build a large company by keeping competitors at bay. He would then go on to become one of the most prolific inventors in history. When he died in 1991, Land had 535 patents in his name, third on the list of U.S. inventors behind only Thomas Edison and one of Edison’s associates. 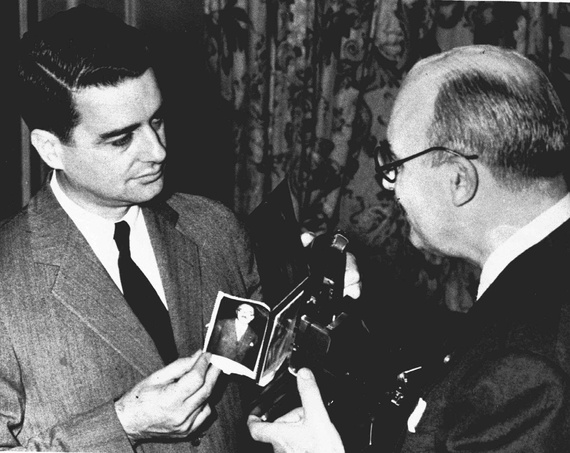 The genesis of America’s patent system can be traced back to the English patent law of 1624. The Constitution authorized Congress to write laws aimed at encouraging intellectual innovation by protecting the rights of creators to their creations. Abraham Lincoln later articulated the rationale in a lecture delivered in 1860:

Before [the English patent law] any man might instantly use what another man had invented, so that the inventor had no special advantage from his invention. The patent system changed this, secured to the inventor for a limited time exclusive use of his inventions, and thereby added the fuel of interest to the fire of genius in discovery and production of new and useful things.

While the patent system certainly contributed to the progress of technology through the Industrial Revolution, attitudes toward the system began to change in the early decades of the 20th century. The emergence of huge and powerful American companies brought with it the anti-monopoly fears that led to the development of antitrust law. In this era, patents began to be seen as part of the problem, as a means for large corporations to amass monopolies in their fields. As a result, an anti-patent attitude arose in the courts and in Congress that persisted into the 1970s. The Patent Office issued fewer patents and declared more patents invalid and thus unenforceable when challenged in court.

In an attempt to counter the negative view of the patent system, the Boston Patent Law Association invited Land to address its 1959 annual dinner, an event that would include the elite of the field, along with a host of federal judges. Land accepted the challenge, presenting an impassioned defense of and rationale for the patent system, in particular its vital importance to the small corporation and the young scientific entrepreneur:

It should be the role of our patent system to bring encouragement, a sense of reward, and a stimulus to prompt publication to men [and women] in applied science. There are a thousand new fields ready to be opened. Only a handful of these will be explored by large corporations, leaving many areas untouched. Without the protection of the patent system, young scientific entrepreneurs cannot be counted on to develop the rest.

The patent community received Land’s speech enthusiastically. General Electric’s general patent counsel called it “the most impressive and significant statement on this subject that has been made in many years.” The text, in its entirety, was published in the Harvard Business Review, and many corporations distributed copies to their executives. From then on, Land was dubbed “Champion of Patents.”

Yet the patent system sailed in rough seas for years to come. It was in this anti-patent environment that the patent struggle between Polaroid and Kodak over instant photography technology began. Ironically, it would be the patent system that Land would one day have to rely on in order to save his company.

Polaroid and Kodak had a long relationship that dated back to the early 1930s, when Kodak became the first significant customer for Land’s plastic polarizer material. In the early 1940s, Land began the research program that led to the 1948 introduction of the very first one-step photography camera and film system. (It required the photographer to time the processing, and then peel the positive print away from the negative.) Land’s colleagues at Kodak, despite not knowing what he was up to, supplied photographic chemicals for those experiments.

When Polaroid finally had a product ready for commercialization, it was Kodak to whom Land turned for help in the manufacture of its film. Through the following decades, Kodak continued to work with Polaroid on each new one-step film that it developed, from sepia to black-and-white, and then to color. It helped with the transition of Polaroid’s technology from the laboratory to a manufacturing facility, and produced the negative components Polaroid incorporated into each of its one-step films.

In 1968, with Polaroid now established as one of Kodak’s top corporate customers, Land showed Kodak executives the prototype for a new generation of Polaroid film, seeking its help with its commercialization. For the first time, the photograph would emerge from the camera and require no further manipulation—one could simply hold it and watch it develop in the light before your eyes. Gone were the various steps required in all previous one-step systems—no more timing, no more peeling-apart, no more print-coating, no more print-mounting. Land enthusiastically told his Kodak colleagues that he believed this new system would revolutionize photography forever.

The Kodak executives took his claims seriously. Following the meeting, Kodak conducted marketing analyses that showed, if Land was correct, Kodak could lose billions of dollars of sales in the coming years because of Polaroid’s new system. This realization changed Kodak’s attitude forever. As a result, Kodak demanded that, in exchange for its help in bringing the new film to market, Polaroid finally issue the licenses that would allow Kodak to enter the instant photography market with competitive products sold in its iconic yellow boxes. 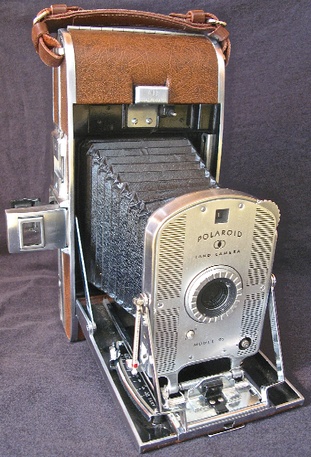 But Polaroid had regularly refused to grant licenses to Kodak, given the disparity in size between the two companies and Kodak’s near-complete dominance of the retail photography world. When Kodak didn’t budge on its demand, Polaroid was forced to go it alone. It built new facilities to manufacture, for the first time, every element of its film. Finally, in 1972, Polaroid introduced its SX-70 camera and film combination, a system that delivered on Land’s initial intent to give the photographer the instant gratification of holding a photograph in their hands seconds after the shutter snapped. Time called it “a stunning technological achievement,” and Life declared that it was “a daring challenge to Kodak for supremacy in the $4 billion-a-year U.S. photo industry.”

Kodak executives agreed with this assessment: Though the company had already poured substantial time and resources into developing its own technology to enter the instant photography market, these efforts completely changed course in 1972 once Kodak finally saw the commercial SX-70 camera and film. To that point, the Kodak prototype, one that had been approved by Kodak marketing and top executive management, was a clunky, hand-operated model called the “Lanyard Camera.” Now, everyone associated with Kodak’s effort knew it paled in comparison to the elegant, motorized SX-70. Executives declared that what the proud Rochester company had on its drawing boards was “no longer desirable.”

Kodak immediately tried to come up with a more competitive system. However, after studying the SX-70 camera and film closely, Kodak scientists were unsure about their ability to meet the challenge. A 1973 internal Kodak report acknowledged that despite whatever efforts Kodak could reasonably expect to muster, it was likely that the best it could expect to produce would be a “me too” system “no more than equal to” and “in some ways … less than equal to” Polaroid’s products.

But Kodak’s top executives were determined, and directed that the research efforts continue, foreshadowing what was to become one of the most important legal battles over technology in the history of the United States. As observed many years later by industry commentators, Kodak, feeling “hemmed in by Polaroid’s vast portfolio of patents,” had indeed “panicked.” In apparent desperation, management directed Kodak engineers to “not be constrained by what an individual feels is a potential patent infringement.” Although the memo did go on to direct the researchers to “consult” the patent department in such instances, the excerpted passage would later become the signal call for Polaroid and its legal team for years to come—all the way up to the U.S. Supreme Court.

It took until 1976 for Kodak to be able to introduce its own instant camera and film combination. During the process, Kodak executives were clearly aware of the potential patent problems they faced. After all, between 1968 and 1976, Kodak’s patent counsel had conducted a thorough evaluation of 200-250 Polaroid patents, issuing written opinions that 67 key ones were either invalid or, if valid, would not be infringed by Kodak’s proposed system. Nonetheless, top Kodak executives were aware that certain Polaroid patents posed particular problems. In particular, Polaroid’s patent on a film unit format closely resembled the one Kodak intended to use. Kodak’s CEO at the time, Walter Fallon, even indicated he thought that Polaroid’s patent on the film format was a major obstacle to Kodak’s plans: He wrote “Big Block” next to that patent on his agenda for a meeting at which the Polaroid patent situation was discussed.

In the end, Kodak proceeded despite the patent risk. On the surface, Kodak maintained it had managed its patent risk to a minimum, because it had in hand the written opinions declaring the Polaroid patents either invalid or not infringed. On a broader level, Kodak seemed determined to address what it perceived of as Polaroid’s abuse of the patent system. While there was no debate that much of the pioneering work in the field had been done at Polaroid, and that those discoveries were legitimately protected by patent, patent monopolies by definition are only supposed to last for a limited period of time. Kodak accused Polaroid of a broad practice of seeking to wrongfully extend those limited monopolies by re-patenting the same inventions over and over again in the guise of marginally different and overly complicated embodiments. In fact, in its court papers, Kodak sought to have the entire Polaroid patent portfolio declared unenforceable because of its alleged misuse of the patent system.

The ensuing litigation over instant photography technology is among the most historic in American legal annals, lasting from 1976 until 1991. Polaroid’s ultimate victory, as a result of which Kodak was forced to remove its instant cameras and film from store shelves, and to pay almost $1 billion in damages to Polaroid, stands as the most severe punishment in the patent field ever meted out by a court of law. More important, the result in Polaroid v. Kodak signaled a shift back to a pro-patent era. Today, companies like Apple can once again rely on its patents to protect the technology it pioneered from alleged infringers like Samsung.

This development would have been satisfying to Edwin Land, who saw the patent system as a tool necessary to encourage innovation. His pivotal role in the trial as Polaroid’s star witness, as a defender of the research he and his colleagues had done, made for a dramatic denouement to his career, and to his life-long support of the patent system.

This post has been excerpted from Ronald K. Fierstein’s book, A Triumph of Genius: Edwin Land, Polaroid, and the Kodak Patent War.